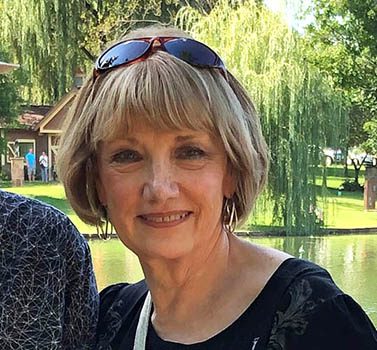 Barbara began painting over 30years ago, studying with many nationally- and internationally-known Decorative Artists over the years and has developed her own unique style.  She has exhibited her work at many art & craft shows and shops and galleries in Ohio, Pennsylvania, and Virginia.

Her designs have been featured in many Decorative Art magazines. Barbara has been named to the Directory of Traditional American Crafts by Early American Life Magazine since 2004. The artists on this exclusive list represent the best “for their finely wrought skill” in telling wonderful stories with their reproduction artwork.

Barbara was honored to have an ornament selected for the official White House Christmas Tree in 2004 and had the honor of meeting First Lady, Laura Bush, at a reception for the artists whose ornaments were chosen. In 2005 Barbara painted an ornament to grace the Christmas tree at the Library of Congress.

In 2008 Barbara was one of four artists contacted by the Society of Decorative Painters asked to submit a design to Mrs. Laura Bush. Barbara’s design was chosen and she painted 1,000+ ornaments which President and Mrs. Bush used as gifts for family, friends, and White House staff. She attended a reception at the White House where she met and was photographed with President and Mrs. Bush.

In 2009 Barbara, along with other members of the Society of Decorative Painters, painted an ornament which was used to decorate the Christmas tree at the Smithsonian.

Barbara is a member of the Society of Decorative Painters and Tole Painters of the Western Reserve, where she has held several board positions.  She is also involved in her church community, the Olde Northfield Historic Appreciation Association, and Nordonia Hills Garden Club, where she has also been a board member.

Barbara teaches in her home studio, does online classes through Artful Webinars, as well as painting chapters throughout the US.

Are you a Fine Artist, Decorative Painter, Plein Air Artist ? No matter what your area of focus we are convinced that you will be able to create extraordinary works of art just as our Dynasty Artists have been able to achieve around the world with our Dynasty/Black Gold artist brushes.  We invite you to immerse yourself in the exquisite art work of Glenice Moore, Jill Fitzhnery, Miguel Rincon, Shar Sosh, Tracy Moreau, Irena Mehldau and many more artists.